The Death of SEO: How Marketers Should Prepare for a Humanized Web

In the Lord of the Rings by J.R.R Tolkien, the Elf-Queen Galadriel says this about her enchanted mirror: “[it] shows many things: things that were, things that are, and some things that have not yet come to pass". Likewise, we can tell a lot about the future of marketing by gazing in the mirror of technology.

In the 2020s, it’s safe to say that cataclysmic changes in search will eventually lead to the death of search engine optimization (SEO) as we know it, paving the way to a Web that is optimized for human beings. And even though we’re not there yet, these trends should change the way that we think about SEO strategy in the present as we prepare for the world that is to come.

During the past, SEO was a cut-and-dry endeavor: web crawlers focused on matching queries with keywords and ranked a page by how many relevant keywords it contained. Early on – of course – search engines began to impose penalties for “keyword stuffing,” a trick used by Blackhat marketers for quick traffic. But it wasn’t until a few years ago that search engines became truly “smart”.

With the introduction of its Rankbrain algorithm in 2015, Google made its first foray into “intent based” search results that looked beyond mere keywords to provide truly relevant results to its users. While the basic tricks of SEO – long and short tail keywords, backlinks, etc. – still worked to some degree, these tactics finally took second place to relevance and quality, creating a better search experience for everyone.

Last year, Google updated its algorithm once more, and now the search engine is smarter than ever. BERT – short for ‘Bidirectional Encoder Representations from Transformers’ – is a layer on top of Rankbrain which uses Natural Language Processing (NLP) to process tiny nuances in search queries and deliver results that are finely tuned to user intent.

BERT also applies to “position zero,” delivering a finely tuned snippet to a user asking how to park on a hill with no curb. 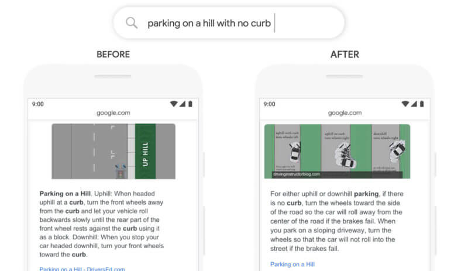 These improved search results powerfully demonstrate one simple fact: the web is becoming more human with every passing year. As time goes by, it will become nearly impossible to “fool” search engines with the old tricks of SEO, and even strategies that worked last year will become much less effective than simply having content well-optimized to a user.

Things that Have Not Come to Pass

Looking backwards, Google has been trying to humanize the web for a long time, and the Rankbrain algorithm was one early attempt. According to Google’s Gary Illyes, it is not possible to “optimize” for Rankbrain at all: instead, “you optimize your content for users and thus for RankBrain”. But these ambitions did not quite match reality.

SEO optimization has remained possible because RankBrain only accounts for one third of the signals which Google uses to rank a website – with the introduction of BERT, which increases the influence of RankBrain, that may be changing. After all, Google has been humanizing the web in many other ways, and this trend is bound to continue throughout the 2020s.

In the past, we’ve written about the growth of voice search, which isn’t substantially different from text-based search from a technical standpoint. But there are differences: people speak differently than they type ("what's the name of that guy in 'Gone with the Wind'" vs. "male lead Gone with the Wind"), leading experts to recommend long-tail keywords and conversational phrases as targets for voice-based traffic.

And now, the gap between voice and text is definitely growing. For instance – as voice-based AI like Siri and Google Assistant become more advanced - they provide a second layer between the user and the search engine, interpreting conversational language to find information. There’s no reason to believe this second layer will not be absorbed by the search engines of tomorrow.

In fact, that’s already happening. In a Google blog announcing the release of BERT, Pandu Nayak said that capturing conversational language was an explicit motivation for the update: “While we’ve continued to improve our language understanding capabilities over the years, we sometimes still don’t quite get it right, particularly with complex or conversational queries”.

In 2018 – and again last year – Google updated its Search Quality Evaluator Guidelines, used by human evaluators to score the quality of a site. This score is passed along to RankBrain, which uses it to “learn” the difference between high-quality and low-quality sites.

In its guidelines, Google emphasized an interesting three letter acronym: "EAT," which stands for "Expertise, Authority and Trustworthiness". Subsequently, many health sites experienced a significant drop in traffic after the first update which some called “the medic update,” precisely because it had been aimed at boosting certified medical professionals over amateurs offering health advice.

There are many factors that could boost EAT ratings, including:

But these are not criteria which Google uses to evaluate the quality of a site. In fact, nobody knows how the RankBrain algorithm works, because it simply follows the example of its human masters through the half-science, half-witchcraft art of machine learning. It’s nearly impossible to gamify the quality rating: those who wish to fool it must fool human beings.

When we forecast the death of SEO during the 2020s, we don’t mean that trying to rank for search engines will ever become unimportant – on the contrary: SEPRs will always be an essential part of any marketing strategy. We mean that one day in the not-too-distant future, “ranking for search engines” will cease to be distinct from “ranking for users”. And in many ways, that is not a bad thing at all.

It's important to recognize that up until now, marketers have been doing the work that search engines were supposed to do for us: namely, connecting people with content relevant to them. As search engines become better and better at understanding human intent, technology is finally getting out of our way – and that means a better and fairer web for all. Those who have great content will be found, and those who are looking for good content will find it.

Until that happens, regular SEO techniques are still important – and we have written a list of the best ones to use in 2020. But marketers should start putting their users first and work to create informative, useful content that demonstrates expertise. In the Web of tomorrow, there will be no better way to rank high and stay relevant.

Are You Ready for the Google Update?

Visual Search is Beating Voice Search and Here's How to Prepare

next Google Has Changed the Way Snippets Work, and Marketers Are Worried: What Should You Do?

Brand Basics - Know Who You Are

How to Raise Your Funnel From the Dead

Seven Predictions for the New Normal of Marketing